Not sure which bear to make?
Which teddy bear is easiest to sew?
Which FFF bear pattern is the BEST?

So here’s a rundown of differences between the Funky Friends Factory bear patterns: 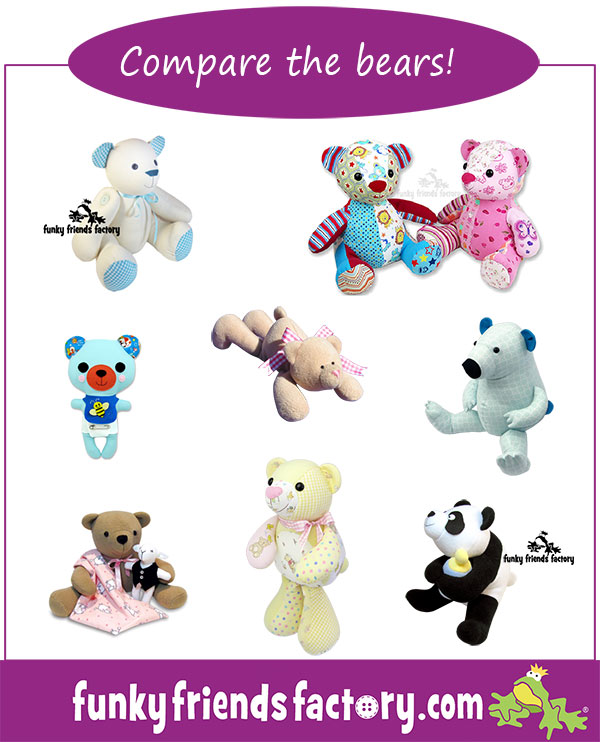 Choosing the BEST teddy bear pattern means picking the one that’s best for YOU!

This will depend on your sewing experience and other factors, such as whether you need a baby-safe toy, and the purpose of the bear (memory keepsake, general play use, personalized gift, etc).  If you’ve never sewn a bear, you can start with Honey Teddy because you can get the pattern for free (see how below!). 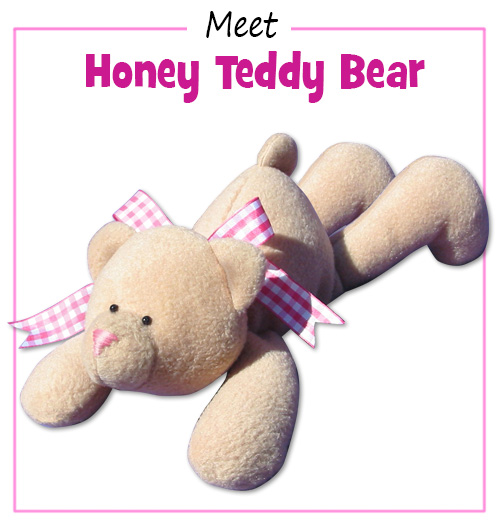 Here is a pic of me holding Honey Teddy so you can get an idea of her actual size. 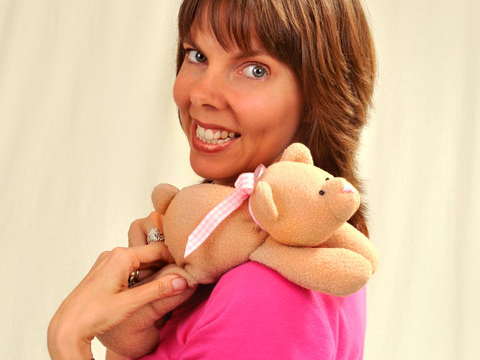 This was the first Teddy Bear Pattern I designed back in 2005…. wow, that feels like another lifetime!

Honey Teddy is a good bear to start with because you can get the pattern for FREE – if you sign up for the Funky Friends Factory Newsletter and I will send you this pattern as a thank you gift!  She also comes with a video to give you a quick overview of how she comes together. You’ll learn how to properly sew a snout with opposing curves, which you’ll want to know for (Keepsake Bear, Izzy, Panda Ning and Preston Polar Bear). I designed Honey Teddy to be lying on her tummy, with her ‘cute little bottom’ in the air, because I hadn’t seen a pattern like that before… so she does not sit up like other teddy bears! Her “floppy” arms and legs are sewn “in the seam,” which is the easiest attachment method for beginners and makes them BABY-SAFE. Honey is a small-ish bear which makes her a great toy for fitting into a shoe box for the  Samaritan’s Purse Operation Christmas Child. Some first-time toy sewers find her easier to sew if you scale the pattern up to 120%. Honey was designed as a toy for a baby, so she’s a smaller scale than the other bears and can be TOTALLY BABY-SAFE if you embroider the features or use felt for her eyes and nose. 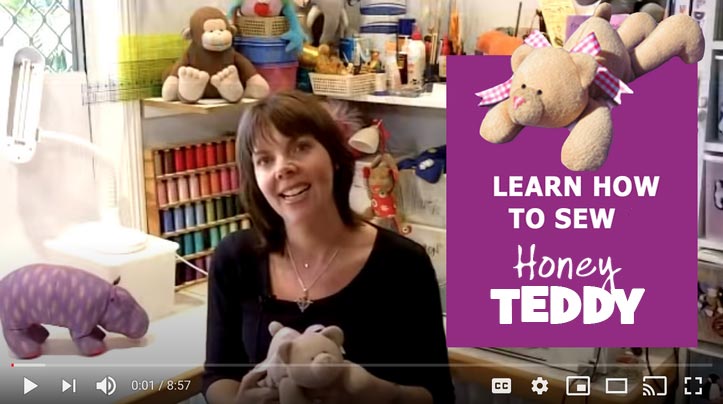 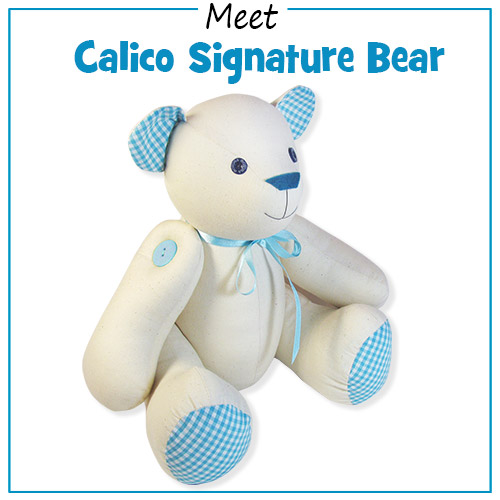 Here is a pic of me holding Calico Bear so you can get an idea of her actual size. 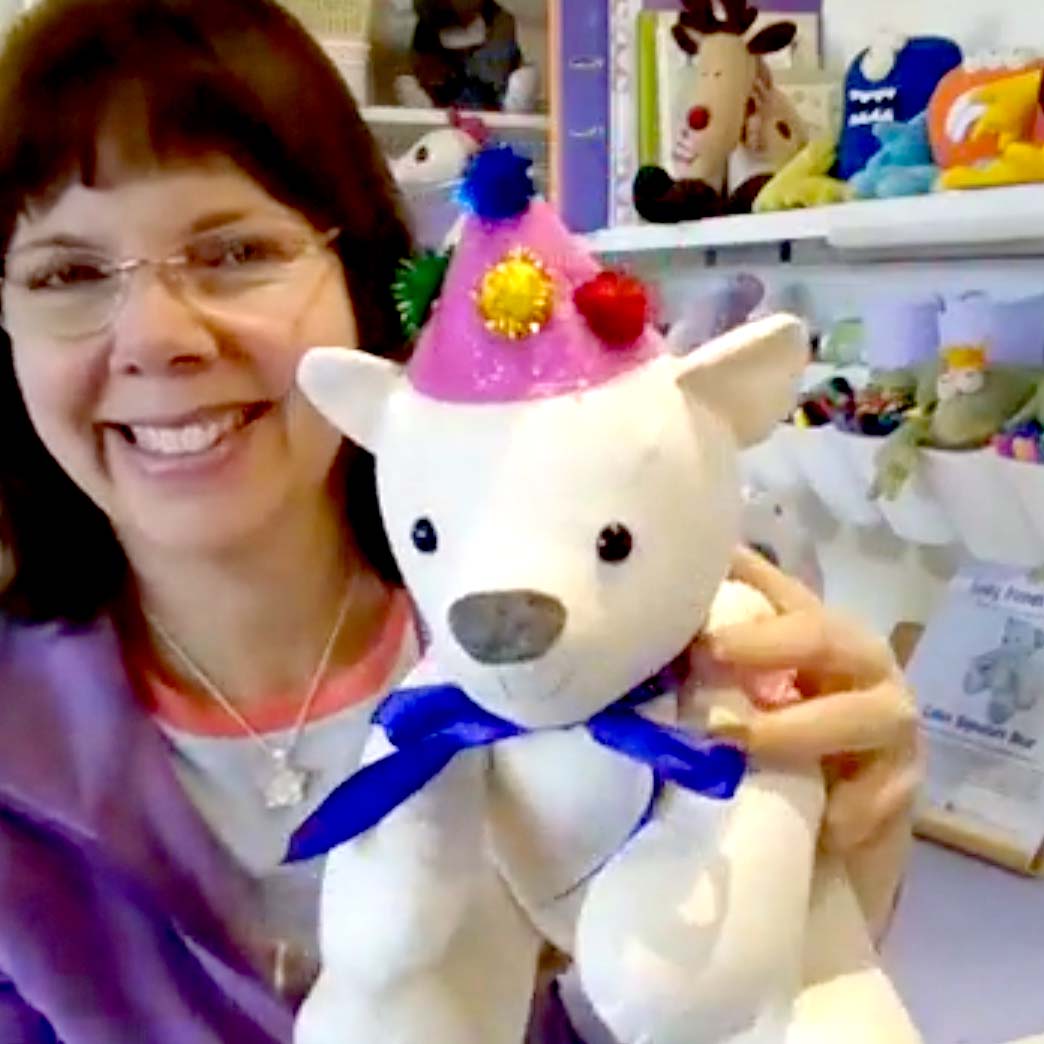 Calico Signature Bear has been a popular “classic” bear for many years! Calico has large pattern pieces that most beginners find easy to manage but he is button-jointed, which some people find takes a bit of practice. I think it’s a bit of a balancing  act to hold the arms and legs in place as you attach them. It’s important to get his limbs tight enough (this often depends on what type of thread or needles you use to do the jointing) but the jointing process itself is simple (there’s a blog post on jointing if you need more pictures HERE ). Due to the joints he is NOT baby-safe. He’s a big bear and popular for making memory bears, keepsakes, and signature toys. 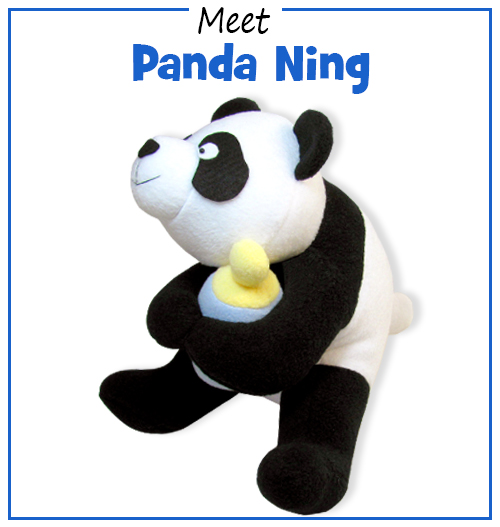 Here is a pic of me holding Panda Ning so you can get an idea of her actual size. 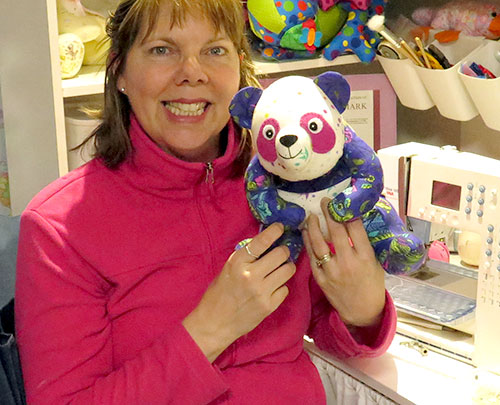 Panda Ning is looking up at you and asking for hugs! There’s a removable baby bottle included in the pattern for nurturing play and Ning has BABY-SAFE (not jointed) arms and legs and her face is BABY-SAFE too because her face is done with felt. Ning is a sitting bear like Melody with legs “fixed” in place, but her arms are “floppy” and easily sewn in the neck seam like Keepsake Bear. If you want to try both techniques in one pattern, this bear will work for you. Ning’s face has a defined circular “snout” like Izzy, Keepsake Bear and Honey Teddy (you can watch the free Honey Teddy video to learn how to sew a snout like this if it’s new to you). This funky panda doesn’t have to be confined to just black and white fabrics: pick two coordinating colors for contrast, two shades of the same color for a hip tone-on-tone look, or even substitute a tiny patterned print instead of the white. 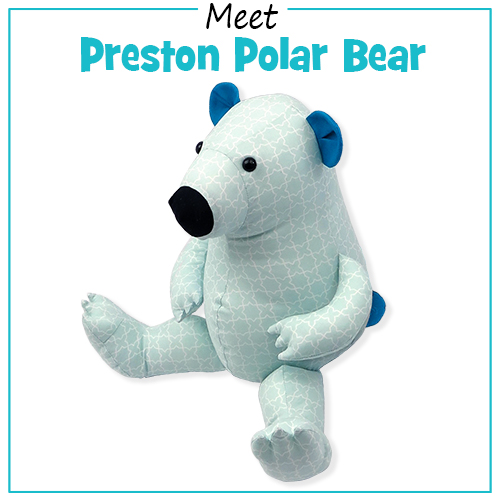 Here is a pic of me holding Preston Polar Bear so you can get an idea of his actual size… he has “sewn in legs” that can swing down, so he can sit and stand. 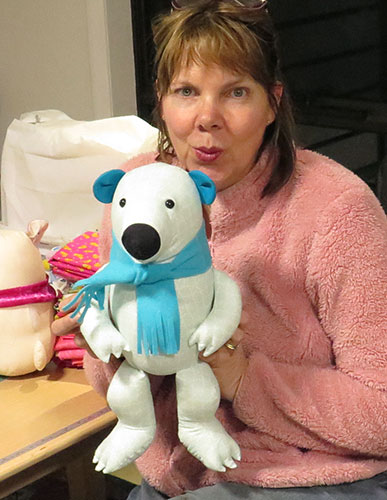 Preston Polar Bear has BABY-SAFE (not jointed) arms and legs and can sit in an upright position like Melody or Panda Ning, but all his limbs are “floppy” like Izzy or Keepsake Bear and easily sewn “in the seam.” This construction method makes his limbs easier than Melody for some people, and the unusual orientation of the limbs in this pattern give it lots of fun movement. Preston’s long snouty nose shape is unique among the bears and a great space (along with his ears) for adding a fun color contrast fabric. (You can use the free Honey Teddy video linked above to learn how to sew the circular end of Preston’s nose.) With his chubby body and upright stance, Preston is very huggable and works well as a “bedtime” toy for kids to sleep with at night. Don’t forget to tie on his fleece scarf so he’s warm. Preston can be TOTALLY BABY-SAFE if you embroider his eyes and remove his scarf. 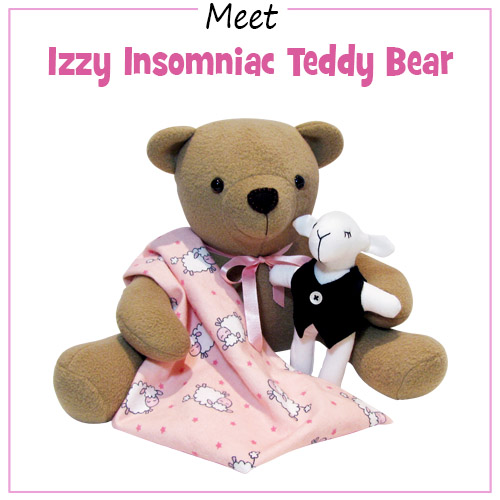 Here is a pic of me holding Izzy Insomniac (AND Sleepy Sheepie) so you can get an idea of her actual size. 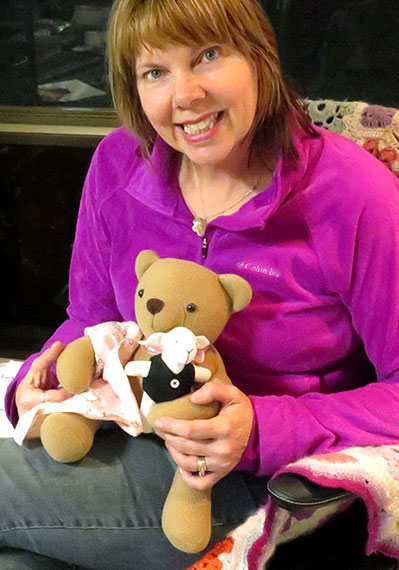 Izzy Insomniac Bear also has BABY-SAFE (not jointed) arms and legs. Her fun “floppy” limbs are sewn “in the seam” like Keepsake Bear. You can make Izzy TOTALLY BABY-SAFE if you embroider the features or use felt for her eyes and nose. Personally, I think she has a vintage bear look (from the 1940s maybe?) and is very huggable. Izzy has fewer pieces overall than Melody and Keepsake Bear and thinner limbs. She is a thinner bear overall and smaller than the bears listed above. Since she’s often up late, she comes equipped with patterns for a blankie and “sleepy sheep” friend (find an extra KNITTED version of the Sleepy Sheep pattern HERE) . 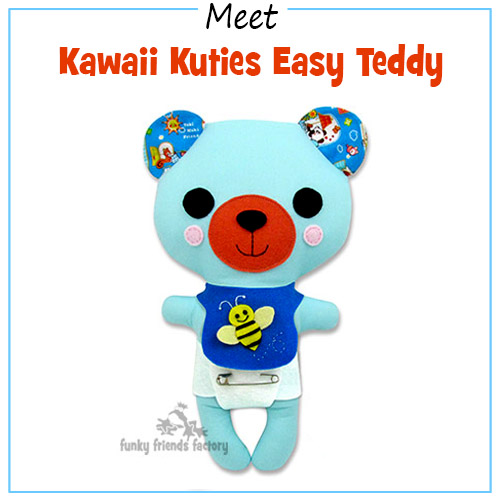 This cute little Kawaii Teddy Bear was inspired by a trip to Japan. I designed a whole range of Kawaii Animals with over-sized heads, tiny bodies and large eyes to create a typical “kawaii” face. This is an easy pattern because the toy is flat (2 dimensional, like a pillow). It is a perfect first toy sewing project for a beginner because it’s  QUICK and FUN to make and a lot of sewing teachers tell me its a great pattern for kids learning to sew. The Kawaii Teddy Bear can be TOTALLY BABY-SAFE if you don’t use safety pin for the diaper/nappy! 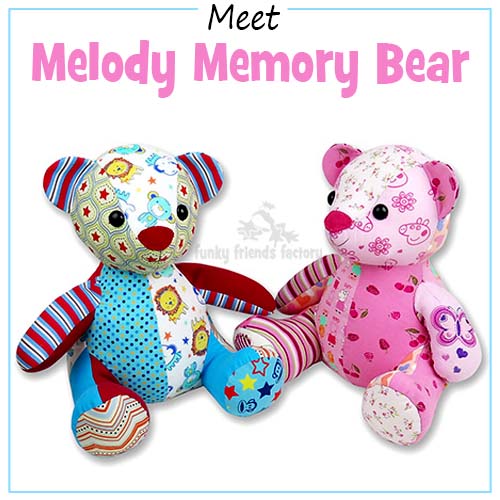 Here is a pic of me holding Melody (x 2) so you can get an idea of her actual size. 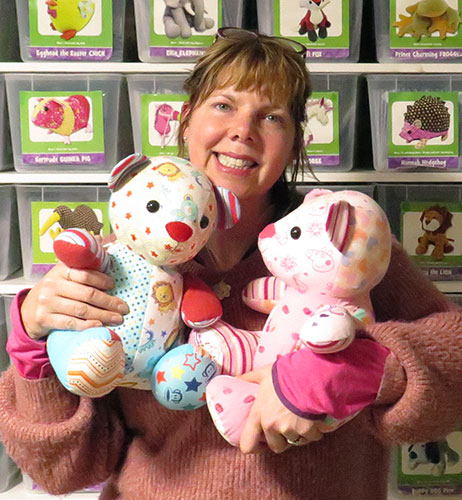 Melody Memory Bear is VERY popular. Unlike the mobile, jointed  limbs of Calico Bear, Melody has arms and legs “fixed” in place so she stays in a seated position. Some people find her arms a challenge on a first attempt, but others have no problem with her on a first sew. Melody has BABY-SAFE (not jointed) arms and legs and you can make her TOTALLY BABY-SAFE if you embroider the features or use felt for her eyes and nose. This pattern contains information about using interfacing, as Melody was designed to showcase multiple fabrics as a memory bear or keepsake bear. She’s a large bear! 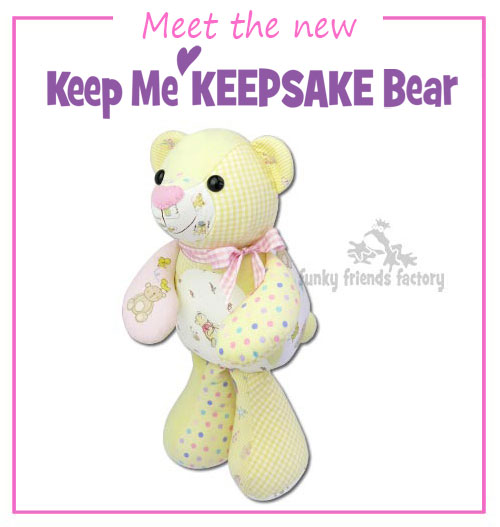 Here is a pic of me holding the final prototype  (No. 10!!!!) of the Keep Me Keepsake Bear so you can get an idea of her actual size. 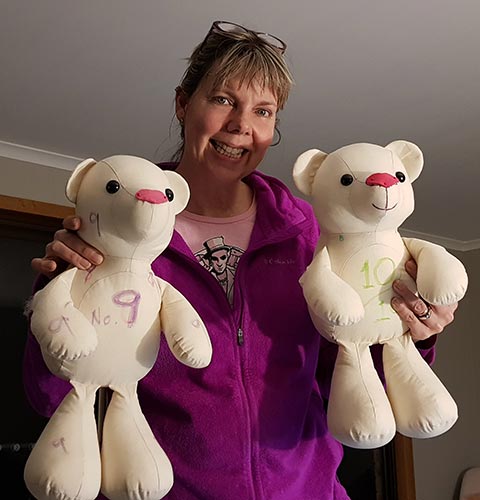 The “Keep Me” Keepsake Bear was designed especially for personalization and in response to design requests from keepsake makers. Her “floppy” yet BABY-SAFE limbs make her a compromise between Calico and Melody. She has arms and legs sewn “in the seam” to make them easier to sew for those that find Melody’s arms a challenge – or if you just want a floppy limbs look! You can make her TOTALLY BABY-SAFE if you embroider the features or use felt for her eyes and nose. The single piece front tummy panel is great for embroidered details or showing off a special piece of fabric or part of a garment for a keepsake bear(memory bear) but it is rounded, so you’ll need to practice sewing curves if you’re used to straight piecing only… but most stuffed animal patterns will require curves 😊. I’ve not heard anyone say Keepsake Bear was a difficult sew. I designed certain parts of the bear especially for personalization via embroidery machine or heat transfer vinyl (HTV, as cut with a Cricut or similar machine): with large flat areas on the footpads, arms, and tummy inset panel. The pattern even shows you exactly where to place/center a standard 4 in/10 cm embroidery machine hoop on these pieces so there’s no guessing needed. The sides of the bear can also be embroidered. Like Melody, this pattern contains information about interfacing clothing fabrics. People are generally surprised at how large the Keepsake Bear is, standing at 45cm/18 inches (the height of an American Girls doll or similar doll).

Well…
have you picked a favorite?

Hopefully this will help you to decide which Bear is BEST for YOU!

Whichever bear you choose, remember to sew a “test” bear before using expensive fabrics or precious pieces of clothing! You can’t go wrong if you transfer ALL the pattern markings and letters to the fabric before you begin sewing…. take it slow and ENJOY the process!

If you’ve never sewn a toy before, I suggest you sign up for my FREE course, Toy-making Made Easy. You’ll get a free pattern to make Plattie Platypus (my favorite easy pattern for teaching people how to sew toys) and learn all you need to know to get started sewing toys!